Guest
Yes im hijacking this part of the forum already

The town centre is no where near like it used to be.  I remember my grandad taking us to olympus for two cones of chips and us sitting on the elephants to eat them.  Thats my earliest memory.

Paying 6 quid to do all day laser quest in the summer holidays.

Bella pizza.  A quid for a 7inch pizza.

The fish market. Mainly because i worked there when i was 14 and my mum made me quit when i got expelled.  (How is stopping me from working a punishment?)

Then the nightlife.  10 quid with drinks free all night in temple.

Posts : 29369
Join date : 2012-08-04
I have to say that I've done the same thing with getting a kebab instead of a taxi and walking all the way back home down Blackburn Road in the early hours.

Does anyone not remember pizza land? That used to be facing alliance and Leicester On the market place side I think it was?

They used to do a good salad bar and pizzas before Pizza Hut and the like come to Bolton.

Posts : 3072
Join date : 2013-10-04
Age : 56
I used to have a job selling stuff door to door when I was about 14, it was supposed to be for charity but clearly wasn't. Me and my mate earned good money from it and if people didn't want anything they just give donations which we weren't supposed to accept so pocketed.
We then used to get dropped off in town and spend what we'd collected in pizza land. They used to do a combo of half a pizza, a jacket spud and coleslaw

Posts : 13027
Join date : 2012-11-30
Age : 48
Location : Burnage, Manchester
i used to love being taken in Boydells for a treat, it was a great toy shop. When i was a bit older i spent most of my time in the various record shops like HMV and Our Price but i remember WH Smiths and Woolworths also selling a lot of records as well. I used to like a bookshop that was in St Andrews Court but i presume that's gone now?

I also used to shop in Stolen from Ivor as a kid, i remember having a matching bright orange polo short and jumper from there in the mid 80's

The biggest loss to the town centre for me was the Water Place closing down, used to love going there as a teenager

Guest
I was going to say going to Boydells as well, usually to buy a new Subbuteo team or some Lego.

My mum used to take me in Whittakers and I used to think it was very up market.

Think the last time I went to Bolton shopping was a couple of Christmases back and that was only to Toys r Us.

Guest
And everyone I knew seemed to have a birthday party at McDonald's.

Posts : 3072
Join date : 2013-10-04
Age : 56
A few eateries from when I was a child in town some of which my mum and dad used to take me too others when I was old enough to go in on my own I used to go in. Golden Egg used to be on Deansgate near where the RBS is now, Tognarellis which was down one of the streets off Deansgate, Derek Guest cafe (now some poncy place opposite the Market Place entrance) and Wimpy on Victoria Square.
Used to think it was great to climb on the lions.
Does everyone remember Bernard who used to sell the Bolton Evening News outside BHS, every time Bolton played at home the away fans targeted him, I think it was the Wolves fans once that lifted him into one of the fountains.

@Norpig wrote:i remember Wimpys opening! That was seen as posh and a treat back then

An international grill in the Wimpy was a veritable feast

Guest
I remember laser quest but there used to be a cheaper one near Tim's Gym called Laser Strike which was a lot better.

Guest
Used to go to the Crown and Cushion every Sunday afternoon for a few games of Snooker. Then an American pool hall opened a few years later (upstairs next to Argos).

Posts : 4622
Join date : 2012-08-15
Location : Planet Rock
Sabini's ice cream parlour and ABC cinema in Churchgate. Windetts in Bradshawgate for subbuteo, Newport street when cars went down. Odeon when it had a restuarant. Bulloughs and co op for records.

Tinned Toms - You know it makes sense!
Posts : 4915
Join date : 2014-09-29
Age : 36
Location : Little Hulton
Used to go to the ABC cinema in town and call into poundstretcher on the way through town for a big bucket of toffee popcorn. Those were the days when they didn't look at you like you'd just pissed in their kids when you walked in with your own grub in a bag rather than buy them in the cinema.

I think you went up steps to Manfredis but can't remember. There was also tognarellis in town but forgotten where.

I think you went up steps to Manfredis but can't remember. There was also tognarellis in town but forgotten where.

Tognarelli's was up some steps on the street that ran by the side of Burton's if I remember right, used to go in there for pasty chips and peas (may have been Carr's pasties even back then). Can't remember where Manfredi's was just remember the wars between them and the Sabini's, they used to set each others ice-cream vans on fire. it was an aviary in the Arndale, can't remember what kind of birds it had in it though, i presume it was budgies and the like?

it was an aviary in the Arndale, can't remember what kind of birds it had in it though, i presume it was budgies and the like?

That must have been the days when Bolton town centre had some decent birds knocking about.

I remember those bloody budgies.

There used to be a previous (small) shopping roofed thoroughfare leading on to Bradshawgate, where Clarks shoe shop used to be and where I was always taken for my shoes (I don't think trainers had even been invented back in my day).

They had a sort of x-ray machine they used to check out how the shoes fitted once you had them on - probably highly dangerous and completely banned these days!

I also remember catching the bus for home from the stop at the bottom of the Town Hall steps and also the time before the fountains were built outside WH Smiths and going to a family party in the Commercial Hotel (pictured below). 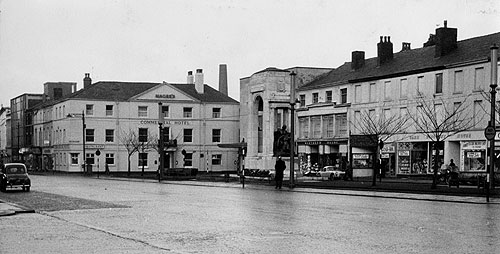 Where was the Commercial Hotel? I can't work it out from that picture

Posts : 13027
Join date : 2012-11-30
Age : 48
Location : Burnage, Manchester
you missed out on the golden era Boggers, Friday and Saturday night down Bradshawgate, every pub rammed and then off to Ritzys, Central Park or for me, Pink Panthers, Happy days

Where was the Commercial Hotel? I can't work it out from that picture

It is on the Town Hall Square and was turned into Mothercare's.

The picture is on the diagonal, where the car seems to be parked on the left is the bottom of the Town Hall steps.

The thing in the centre of the picture is the war memorial thingy (directly facing the Town Hall) and the Commercial is the big white building to the left.

If you walked past it (in the direction the car is pointing) you would pass Boydell toy shop and the Army and Navy store on your right - heading towards the Market Hall.

Note Boydell's toy store used to be originally at the top end of Newport Street opposite roughly where the Wheatsheaf was but I would think you would be too young to remember in there.

@Norpig wrote:you missed out on the golden era Boggers, Friday and Saturday night down Bradshawgate, every pub rammed and then off to Ritzys, Central Park or for me, Pink Panthers, Happy days

used to be a set route that everyone followed because you used to bump into the same people in every pub. We used to start in the Man & Scythe, over to the Brass Cat, round to Swannies across to Yates's for an Aussie White and then Maxims then Ritzy's. Went to Sundowners as well which was a dive but you always pulled in there.