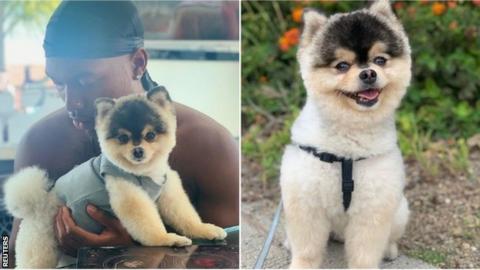 Daniel Sturridge's dog was taken from a West Hollywood house

Former Liverpool striker Daniel Sturridge has offered a £30,000 reward for the return of his dog, which he says was stolen during a break-in at his house in Los Angeles.
Sturridge, 29, posted videos on Instagram showing damage at the West Hollywood property.
A smashed glass door is visible and a clearly upset Sturridge says several bags were also taken.
"We will pay anything for the dog," said Sturridge.
"Whoever brings my dog back, 20 grand, 30 grand, whatever."
Sturridge has posted four images of the dog - who has his own Instagram account - and also uploaded CCTV footage of three hooded men.
He says the dog went missing while he was out of the house for two hours on Monday night.
Sturridge told followers: "Whoever knows who broke into my crib, I'll pay you anything. I'm dead serious.
"I'll pay whatever - it doesn't matter the cost."
Former England striker Sturridge, who is linked with a move to newly promoted Premier League side Aston Villa, left Liverpool when his contract expired at the end of June.

@rammywhite wrote:What the hell is he doing with a pad in LA. Who do these players think they are.
Someone should have stolen him and left the dog.