I'm no body language expert but I have been on a few courses about how to read people over the years and he definitely looks a bit nervy to me.

Still think he'll win though if he protects his chin.

@Bread2.0 wrote:I'm no body language expert but I have been on a few courses about how to read people

Do you read palms as well?

It shouldn't be really a 27 year old Adonis against an old man of 40!

I thought Klit's experience would be enough to outfox Fury but Tyson boxed amazingly and proved me wrong.

So it should really be an easy call to say Joshua should do the same then - but will he?

Joshua has never gone over seven rounds before and he carries an awful lot of muscle.

I can see Klit being clever enough to make the bout go the distance and let Joshua tire as the rounds go by.

But on the other hand Joshua can hit!

My thinking is that Klit doesn't need the money nor the chance to make his name in the game so he must be boxing on because believes in himself and his ability to beat someone in amazing shape and a dozen years younger than himself.

He doesn't strike me (no pun intended) as someone just turning up expecting to win easy, I fully expect that he's trained hard and fully for this.

If Joshua can't stop him within the first half of the bout then I can only see a win for Klitschko.

So once again I'll go for Klit and see if he'll prove me wrong yet again! 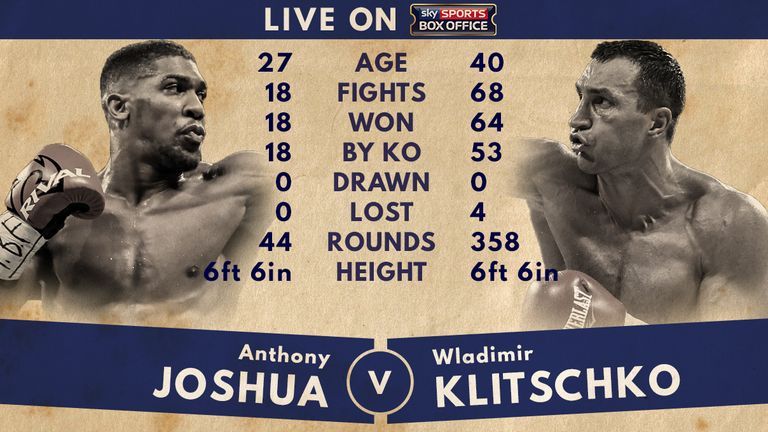 Posts : 12745
Join date : 2012-11-30
Age : 48
Location : Burnage, Manchester
just ordered the pay per view so can't wait for this now. Klitschko looked petrified of getting hit by Fury in his last fight and and for me Joshua hits even harder, i just wonder if he has got over that properly?

I'm going for Joshua to win in the first half of the fight as i think he will have too much speed and power.

Posts : 5241
Join date : 2012-01-19
Location : East Sussex
Fury was a bad day at the office a one off klit will own Joshua and end it with a ko or stoppage either early or after Joshua has run out of oxygen with those muscles,this is not a good fight for Joshua. On the other hand he might blast klit out early. I'm also going for klit but probably wrong as well.

He's pretty new to Sky and the whole "push a button on your remote to buy shit" thing is still pretty new and awesome in his mind.

Anyone who saw the picture I posted after the last Sky Box Office fight will appreciate that this is a double-edged sword for me.

I get to watch the fight for free but I also have to put up with a couple of hours of mindless bullshit during the pre-amble, as he pontificates about why he thinks Fighter A or B will win.

(His prediction will vacillate wildly during the course of the night and will depend on largely on which pundit has spoken most recently.)

And whoever wins, he will have called it.

At least I'll get a cup of tea and a piece of cake.

@Bread2.0 wrote:I get to watch the fight for free but I also have to put up with a couple of hours of mindless bullshit during the pre-amble

Now you know how Mrs B feels. Every single night.

I've escaped, by the way, and booked it at home.

Fair play to both boxers - it could have gone either way at times.

A well deserved round of applause to Klitschko too. 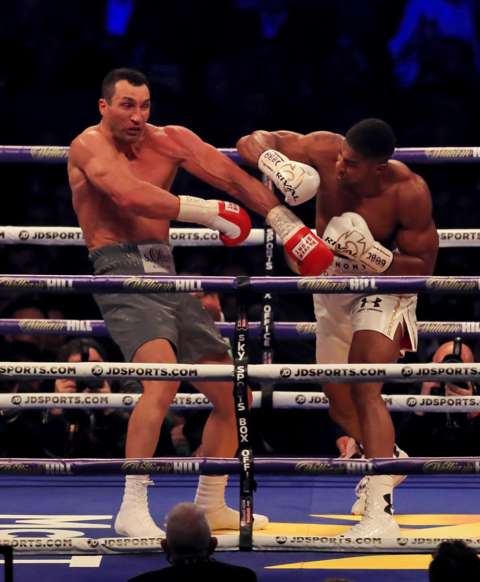 Posts : 11320
Join date : 2012-07-19
Age : 39
Location : Halifax
Was a great fight, both knocked down. Took longer for AJ to recover but turned as the rounds went on I think age went against Klit. A rematch? Tyson Fury next? Exciting times

I thought AJ was in trouble after he went down but Klitschko didn't move in quick enough to finish it off and let him recover.

Posts : 17325
Join date : 2012-01-12
Thoroughly enjoyed the fight despite watching it on a phone in a bar in Italy. Thought Joshua could have mixed up his repertoire of punches earlier in the fight when there were openings for hooks and uppercuts that he didn't take - but he can learn from that. Certainly paid off at the end.
Enormous hype surrounding the young man now so hopefully he'll pick his fights carefully going forward.