Posts : 19417
Join date : 2012-01-12
..has finally shuffled on at the tender age of 103. He was a ham of an actor, but was in a way part of the reason I love cinema so much. Imperfect (and historically inaccurate) as they were, films like Spartacus, The Vikings and Lust for Life influenced my younger years and TBH I'd be happy to watch them again anytime. There was a lot to admire about the man, especially his maverick attitude towards the Hollywood system and his defiance of McCarthyism. Well done that man!

Posts : 5378
Join date : 2012-01-19
Location : East Sussex
I preferred his dad michael douglas and his uncle karl malden in streets of san francisco when my parents let me stay up 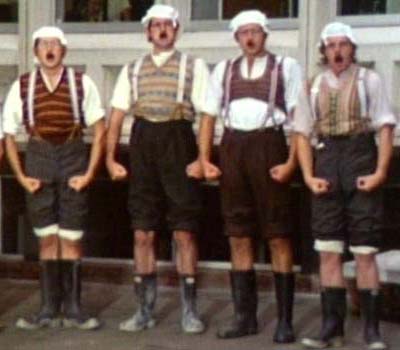 No just a knee tremble

@wessy wrote:Hail Einar  loved the Vikings that pesky Hawk took my eye out, I picture you Bonce in the Tony Curtis Role but with two hands.

What a sight I must be. Chasing down Kirk in my best slippers.

@wessy wrote:Hail Einar  loved the Vikings that pesky Hawk took my eye out, I picture you Bonce in the Tony Curtis Role but with two hands.

That image of him tied to the rock whilst the bird pecked his eye out lives with me to this day and encapsulates the "strong made defenceless" concept used so many times in film. An early squirm influence for sure.