Highlight must be the Champions League final - 8.00pm tonight.

Liverpool aren't my favourite team but you've got to take your hat off to them these last two seasons - and most start favourites - but I'm going for a Spurs win nevertheless!

Joshua v Ruiz fight is technically tomorrow but for us it is in the middle of the night, tonight (around 3.30am).  I won't be watching it and Joshua is miles in front on the betting to win but I don't think Ruiz is such a push over as thought.

Ruiz lost to Parker and Parker made Joshua look bad but still lost - so I won't be stopping up for this.  Joshua to win though possibly on points.

Last ladies warm up game for their world cup- live on bbc iplayer now if anyone is that bothered.

I don't like women's football, it's simply not as fast, powerful and competitive as the men's game - but plenty seem to think it's great - I won't be watching.

Big cycling day for me - the Tour of Italy (known as the Giro) ends tomorrow and today is the Queen Stage (the name they give the hardest day cycling of a tour) which involved a huge day in the mountains.

The Tours not gone to plan and some of the bigger names have performed badly so much so that a bit of a surprise package in the shape of an Ecuadorian is looking the likeliest to win right now - I hope he does too!

On a very sad note though, news is in that former Arsenal player Antonio Reyes, 35, was killed this weekend in a car crash.  RIP.

Hopefully I can keep my eyes open for it.

@BoltonTillIDie wrote:Liverpool deserved to win the Champions League after the season they have had

They aren't even the best team in England this season.

Spurs aren't even in the top three!

Posts : 11771
Join date : 2012-07-19
Age : 40
Location : Halifax
They’re the best team in Europe this season.  Lost one game all season in the premier league, and that was against the premier league winners, not really that funny

They are not the best team in England as per the league table.

So by definition they can't be the best team in Europe.

Spurs weren't even in the top three in England yet presumably as runners up to Liverpool tonight, they are considered the second best team in Europe.

Doesn't make sense does it?

I'm pleased we had the two finalists and that one of our teams is considered to be the European Champions for the 2018/19 season but in reality neither of the teams are even the best in England.

That's why I stated the famous phrase (that you don't seem to be aware of?) that it is after all - a funny old game!

The sheer smugness radiating from Wendy is already unbearable!

I'm never ever going to hear the end of this. I love my wife but please, no more Liverpool talk. Please?

I'm not sure I can take it.

Posts : 5378
Join date : 2012-01-19
Location : East Sussex
Liverpool would have been trashed had city been there like they should have, spurs were pathetic, Manchester City are the best in England.

Posts : 4006
Join date : 2013-10-07
Age : 51
Location : Chorley Lancs
I disagree AD. City have now 'choked' twice on the trot in the Champions League against English opposition. Certainly they are an awesome side but they had no divine right to be in the CL final any more than Real Madrid or Barcelona do. Love them or hate them but Liverpool have now won the competition six times, easily the most successful English side in Europe and behind only Real and Milan in terms of CL victories.

And Lewis Hamilton moaning about it.

Pretty sure it's New Zealand.

Pretty sure it's New Zealand.

I must still be recovering from the fantastic win and stuffing of Smith and Warner at Edgbaston yesterday!

I must still be recovering from the fantastic win and stuffing of Smith and Warner at Edgbaston yesterday!

Brilliant win that was.

Obviously the women's game is atrocious but that goes without saying.

The men's has been a huge let down though, it's been a piece of piss for the top 3, I don't particularly care which of them wins it.

Posts : 752
Join date : 2017-11-21
And the Bolton Ironman on Sunday, I hear the dirty mac brigade enjoy ogling the sweaty cameltoes running round the Town Hall Square.

@BoltonTillIDie wrote:Looking forward to the cricket.  You forgot about the netball sluffy.

I don't get the hype, it simply isn't entertaining to watch.

The women's gold medal team at the Commonwealth games won the BBC Sports Personality Team of the year for 2018 ffs!  What a joke.

I could have mentioned my personal favourite that is happening this weekend and for the next two weeks too - the Tour de France - many big names like Foome and Dumoulin didn't even make it to the start line this year, so Geraint Thomas the man to beat and the most likely for someone to be better than him is his own team mate Egan Bernal.

I'd forgotten all about Amir Khan's joke of a fight tonight which he won easily (reported he got £7m for doing it too) but I should have at least given a shout out to a very anticipated match up of the next generation of British heavyweights between Nathan Gorman (Cheshire) 16 wins out of 16 against Daniel Dubois (London) 11 wins in 11.

I've never seen either of them fight but heard good things about both of them.

Dubois is a over a year younger at 21 and seems to be better fancied but I'll have a punt on Gorman who has that bit more experience in terms of fights and rounds (and is also Tyson Fury's cousin) and if for no other reason, he is the 'northerner of the two! 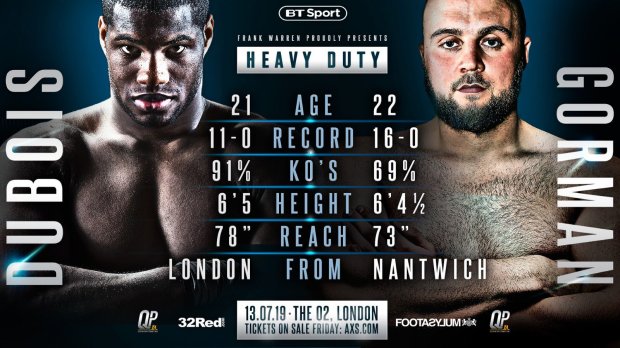 Should be far more entertaining than flipping netball!


And finally, before we all forget, we also have Bolton Wanderers (the magnificent 6) v York City Sunday afternoon as well!

Don't know if Radio Nuts will be covering it though?

Posts : 4006
Join date : 2013-10-07
Age : 51
Location : Chorley Lancs
Oh. My. God. Watching the cricket has aged me 20 years at least. What a final, what a way to finish and England are the champions. Brilliant but utterly nailbiting stuff from start to finish.

Posts : 1689
Join date : 2013-09-01
Location : Old Boltonian
OMG! Sport doesn't get more electric than that, whether you were watching the cricket or the tennis. I've got sore fingers and tendons from frenetic pounding of the remote control!
Unbelievable tension that no other sports can match for the sheer length of time that it's possible to be gripped.... imo....

Posts : 752
Join date : 2017-11-21
Disappointing day for me, I was more bothered about Federer winning than the result of the cricket although I switched over to watch the exciting finish at Lords.
It's sad that I have lost interest in cricket, I was gutted when we lost to the stans in 1992 but am not arsed either way about it now.It's to do with the way sky have ruined the sport in my opinion from splitting the county championship into two divisions, making teams wear coloured pyjamas rather than whites, and jazzing up the Ashes to the detriment of every other team England play.Back in the day a West Indies tour of England was bigger than Australia coming here

@Growler wrote:It's to do with the way sky have ruined the sport in my opinion from splitting the county championship into two divisions, making teams wear coloured pyjamas rather than whites, and jazzing up the Ashes to the detriment of every other team England play.Back in the day a West Indies tour of England was bigger than Australia coming here

Cricket is far more exciting than it was even 10 years ago, and Sky have played a part in that.

The only reason a West Indies tour was bigger back in the day was because they had a great team.

Re: Great day for sport today!