Yep good to see and sets up today for a battle royal. Who would have ever thought it just a few days back even!

Brilliant win and what a back story seems a genuine guy. made me laugh though, came on to the podium The Anthem started and they went to an ad break.!!!

So what month will this be next year if normal.

wessy wrote:Brilliant win and what a back story seems a genuine guy. made me laugh though, came on to the podium The Anthem started and they went to an ad break.!!!

So what month will this be next year if normal.


Normally top GC riders will target the TdF or miss out the TdF and do both the Giro and Vuelta (particularly if they/their team, don't think they stand much of a chance winning the TdF - which is without doubt the one they all want to win).

Sometimes the very best GC's will aim to do the TdF and one of the other Tours but seldom do they win both as the target is the TdF to peak for, so they either go into the Giro underprepared training wise and peak for the TdF, or ride the TdF and hope they still have enough in the tank to take on and do well at the Giro.

Again it also depends on how good GC rivals are, for instance Froome dominated his generation taking over from the Contador era and handed it over to the current generation.

However have we got a multiple crop of young riders of similar talent?

Dumoulin was the heir apparent but Froome crushed him at the Giro two years ago and he's not been the same rider since.  Bernal has been highly touted but I'm not convinced, I thought Roglic was the man to boss cycling but Pogacar did him at this years TdF.

Age wise it looks to be Pogacar who could be the next generational top cyclist but who knows!

A great time to get into cycling as the old guard has made way for the new generation and I'd not even heard of several of them before they made their names in the Tours so far this year.

Lots going on right now for instance, now that Tao has won the Giro and Carapaz also the year before Ineos has four Tour winners (with Thomas and Bernal) on it's roster next season with only three Tours to aim for!  Somethings going to have to give there one would imagine.

Will covid still be a factor next year? 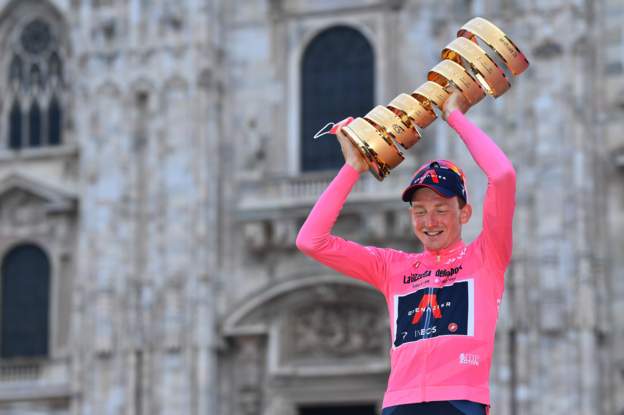 Thanks for all the above Sluffy so once the Vuelta finishes that will be the end of this season? With the next tour dates as above i guess they start with the Monuments ? basically do we have to wait until say April to see more top class cycling? or are there other events other than Tours and the Monuments like smaller rated tours ie Tour of Yorkshire type events.

Read an interesting article in The Cyclist discussing Pogacar, basically questioning if he was clean based on his power ratio's and performance levels, he had plenty of exceptional natural attributes, but based against other legends some of his stats threw suspicion on his stats.

They didn't come to a conclusion but obviously due to the sports past any new winner causes automatic questions to be asked, this is what saddens me these days about sport, but you have often said just enjoy what you are watching because we can't really be sure, and i have come to the same conclusion other wise i might as well stop watching sport full stop.

Clean or not i have really enjoyed the two tours i have witnessed and think it is a changing of the guard possibly.

Yes, who knows what goes on really - a bit like being on Nuts in a way - just enjoy both as entertainment - better to travel than arrive, or something like that.

I've not seen the article but it makes me wonder what legends he's been compared to, as there's probably a question mark or two over their careers as well!

I tend to think it is probably as clean as it has been in my time of watching cycling and Roglic should really have won the TdF but nobody can prove anything really either way - just like on Nuts again!

The new season normally starts in January in Australia and Argentina - no idea if it will with all this virus about though?

I suppose there is a big question mark over the future of some of the teams with their big sponsors pulling out - I think the polish team CCC (the ones who ride in orange) look certain to go - but I think cycling is to engrained in continental culture to not be there next season come what may.

Just got the Vuelta to keep us entertained until then and I see Carapaz has taken the race lead and Roglic (and Jumbo) had a real bad day - tiered legs catching up with them perhaps?

Rest day tomorrow and two more weeks to come - virus permitting - what's not to like!

PS - Brit Hugh Carthy moved up to second and seems to be the leader for his team at the Tour and I've always classed alongside the likes of Tao, as one who can keep up with the proper GC's in the big mountains (not sure what his TT is like though?).

Thanks again very informative did they say that NTT was folding? many riders out of contract, i will enjoy the next two weeks and feel now i have a base to build on in terms of teams and riders and tactics, I like Carapaz i expect him to push Roglic all the way, Will look out for Carthy more talent like you say what is there not to like.

Shall  we continue on the Vuelta thread from here in?  Last question for now (lol) I have watched two tours both have Started / finished with a TT. is this set in stone? are there always 3 , not sure with the Vuelta reduced to 18 days but under normal circumstanses.?

No, extremely rare to finish with TT's or even any competitive stage, the last day is usually a procession to crown the champion and in the case of the TdF the blue ribbon sprinters stage of the year.

Always been a waste of a day really for me but then again I'm not the one who has been racing across a country for the last three weeks.

I think the organisers of the tours will have seen how lucky they have been with both being settled in exciting ways by the TT's and it wouldn't surprise me at all if we see them used on the last day again in the next years or two, tours to come.

No, everything is variable in the Tours, sometimes you may only have one TT, sometimes they include Team Time Trial stages - just depends how the organisers want to mix it up and which star riders they hope to attract with the courses they set.

The Vuelta was meant to start in the Netherlands this year for the first 3 days but this was cut due to covid and everything else remained the same, hence why the tour is 3 days shorter than usually.

(that's also why one of the stages had to be altered when France had to close it boarder with Spain as the route that day was to visit the French side of the Pyrenees mountains).

Yes see you over on the Vuelta thread from now on!

Carapaz looking good but Roglic claims he only lost time to a 'kit' issue rather than 'cracking' on the mountain itself and to be fair it did seem odd that non of the jumbo boys had a good day that day and  maybe they were just caught out with circumstances rather than an issue with loss of form.