How is the Tory government doing?

@luckyPeterpiper wrote:
BTID I'm not just talking about covid although I think they screwed that up from the beginning. The main problem here is Boris Johnson is the same sort of populist plank that Don Trump is. They both make these big promises and say how it's all going to be wonderful without having a clue about how they're going to achieve any of it. The so-called 'Oven Ready' Brexit deal immediately springs to mind here. Boris has been caught out in lie after lie, not mistakes, not misreading the reality, just outright lying for his own ends and to keep the far right happy.

Frankly he's got nothing of substance in his repertoire only soundbites that mean nothing and accomplish less. I agree Co-vid would have caught any Government on the hop but his idiocy was in full view just this week. On Sunday schools were 'completely safe' and every parent should send their children back on Monday. As late as 8 am on January 4th he was still insisting this was the case in absolute disregard to what the experts were telling him and us. By Monday night we were suddenly in another national lockdown and schools were closed as they were 'high risk' places. Worse yet Boris refused to accept any responsibility at all for totally screwing up and tried to blame the scientists for his own failures.

He's made it clear international law means nothing to him and that he's more than willing to violate treaties he himself signed while trying to blame 'Remainers' for the fact his 'deal' was actually worse than the one Theresa May negotiated and that he personally knew it would be from the start. For a man who claims to be a staunch unionist he's done more to destroy the UK in one year than the SNP,Sinn Fein and Plaid Cwmru could have accomplished in a generation.

I used to be a dyed in the wool moderate Conservative but that party no longer exists. In much the same way the Tea Party and MAGA have destroyed the Republicans from within so the 'Brexiteers' and the likes of UKIP have destroyed the Tory party. The far right has managed to totally subvert what it means to be a conservative and now sell nothing but ignorance, fear and hate. We will all pay the price for that, most especially our children and grandchildren unless our generation wakes up and takes the party back to where it belongs, the centre-right.

Of course that's only my opinion but I honestly believe that what we saw in Washington just two days ago wasn't the end or even close to it. As the late, great Winston Churchill said 'this is the end of the beginning'. What happens next and how our country moves forward in the post Brexit and post Covid era will depend entirely on us the voters and our ability to see past the smoke, mirrors and outright lies that have been propogated without true challenge for far too long already.

Good to see you back PPE and I agree 100% with what you say.

Trump and Boris are two of a kind. They have no respect for truth or honesty and care nothing for anybody but themselves. It is astonishing how gullible so many people are. 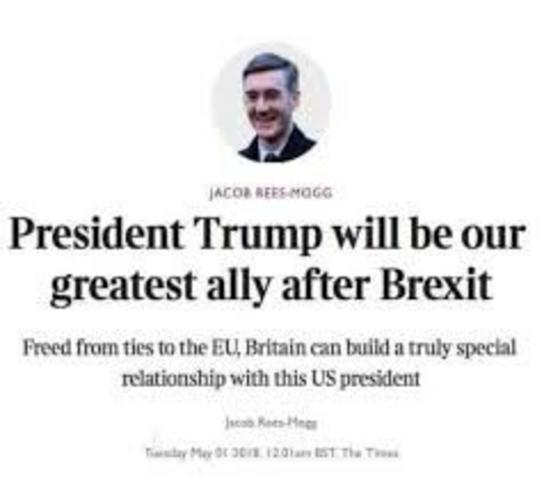 Good to see you back PPE and I agree 100% with what you say.

Trump and Boris are two of a kind. They have no respect for truth or honesty and care nothing for anybody but themselves. It is astonishing how gullible so many people are.

Peter and xmiles:- our little group of pals here, now zooming rather than meeting weekly, have been saying exactly the same things as you about Boris developing into a mini-Trump, and news media fuelling serious division.

Posts : 4005
Join date : 2013-10-07
Age : 51
Location : Chorley Lancs
Hi xmiles and okocha. Glad to be back. In response to okocha I couldn't agree more. The media, particularly outlets like Fox News in America and the Daily Mail here have a lot to answer for. They've not just reported the fantasist, conspiacy theory spouting liars on their platforms, they have actively supported and promoted those self same lies as 'fact' while desperately trying to blame anyone, especially the so-called 'radical-liberal' group for their failures to act as a responsible news provider.

Of course Fox and the Mail are far from alone in this but while other news outlets may have been biased for or against Trump and Johnson they are the most vociferous and enthusiastic peddlers of the frankly fascist agenda around. Make no mistake, Wednesday was intended to end with the deaths of many of the lawmakers in the Capitol building, almost certainly including Mike Pence, Mitt Romney and of course Nancy Pelosi. It was a real, frighteningly real attempt by Trump and his supporters to create their own 'Kristallnacht' and give him an excuse to invoke the insurrection act. If you doubt that I would simply point out that similar crowds 'spontaneously' formed at the capitols in several other states, all of which Trump lost.

Is Boris as bad as Trump? In truth I don't claim to know but I'd be lying if I said I was certain the answer is no. We've actually reached a point where two of the world's most famous democracies are under the leadership of men who actually don't like, respect or even want democracy.

If Adolf Hitler was alive today he'd look at the UK and US and be very happy with what he saw.

Posts : 6456
Join date : 2012-01-06
You have only to look at how happy Russia and China are with what happened to realise what an idiot Trump is. And yet millions of deluded fools still think the election was "stolen".

The one thing that Trump and Boris supporters share with brexit voters is a complete inability to process factual information. For them it is all about their prejudices. They are completely immune to facts that contradict their fantasies.

Posts : 1688
Join date : 2013-09-01
Location : Old Boltonian
Boundless ineptitiude. How many more examples of incompetence will there be?

Learning from Trump, the government of course try to deny the thorough findings of the report without providing any evidence to support their denials.

Posts : 1688
Join date : 2013-09-01
Location : Old Boltonian
And just in case you still thought that the cabinet had some competence, here's Education Secretary, Gavin Williamson to prove himself the leader of the idiots:

Posts : 4005
Join date : 2013-10-07
Age : 51
Location : Chorley Lancs
I wish I could say it's a surprise. Sadly it isn't. For the first time in my life I'm actually praying that a Tory prime minister is booted out soon. Since there isn't a scheduled general election until 2024 it means removing him from within the party at the next conference. It won't happen thanks to the sycophantic fawning idiot brigade surrounding him and the fact that the backbenchers are frankly more concerned about staying in office than the good of the country but God just once I'd like to see a return to something that at least resembles principle in the tory party. While I felt Corbyn was trapped in the past and frankly dangerously far left at least he believed what he was saying and he had the courage to stand up for those beliefs. It's sad he failed on the issue of anti-semitism and prejudice but frankly he's far from alone in that sort of bigotry and the idea of Tories trying to castigate him for 'racism' was actually enough to make me feel sick at the rank hypocrisy on display.

Posts : 18924
Join date : 2012-01-12
Staying in power and eliminating the competition has always been a controversial business. The Russians used to send political opponents to the Gulags but nowadays novichok seems to be the solution of choice. Iran uses the Revolutionary Guard to keep dissidents under the thumb and in North Korea - well there is no opposition - dissidents just try to escape to the South.
In the UK our government's weapon of choice is the Boundaries Commission whose 2023 review is set to ensure Labour never wins another election by creating extra MPs predominantly is safe Tory regions like the East and South West. Simultaneously they propose to cut the number of MPs in the North West, North East and the West Midlands. Won't be popular but they won't need the "blue wall" any more now that the idiots have served their function. Proposals here.

Posts : 6456
Join date : 2012-01-06
The reality is that the Boundaries Commission is only balancing the number of voters so that constituencies across the UK will be updated and have a near equal number of electors.

Since there are now more people in the South East and fewer in the North that means a reduction in the number of constituencies in the North. Given the actual numbers involved it is not going to make that much difference anyway. 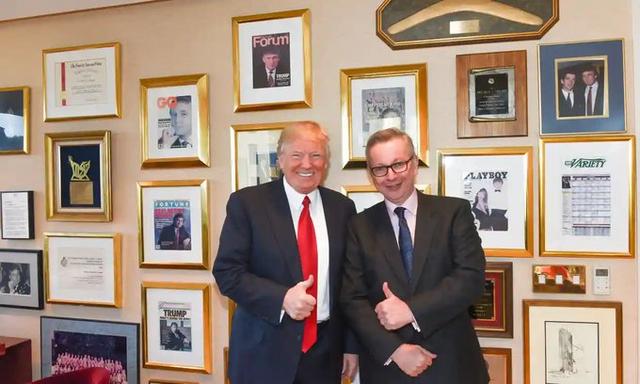 @boltonbonce wrote:Well, they both have thumbs, but are they opposable?

Have you noticed the Playboy photo behind Gove? 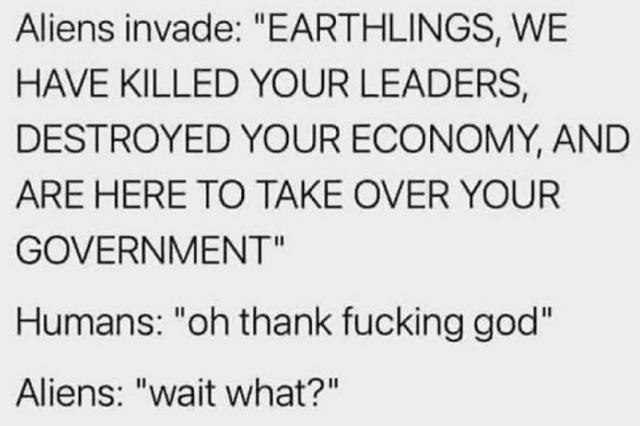 @boltonbonce wrote:Well, they both have thumbs, but are they opposable?

They are both capable of attempting a coup. The Tories kept Gove in the new reshuffle out of sheer bloody mindedness as a punishig nod to the poor.
Jeremy Hunt got a lot of ideas from Iran when he visited there. Gove will have taken notes on starting a Coup d`etat from Trump.

Conservative MP Pauline Latham has come out in defence of the government after pictures appeared online showing paltry portions that are being distributed to vulnerable families.

Speaking to Channel 4’s Jon Snow the MP for Mid Derbyshire said “it’s only their lunch” as the scarcity of food caused outrage among voters.

Conservative MP Pauline Latham has come out in defence of the government after pictures appeared online showing paltry portions that are being distributed to vulnerable families.

Speaking to Channel 4’s Jon Snow the MP for Mid Derbyshire said “it’s only their lunch” as the scarcity of food caused outrage among voters.

I seem to remember reading that they provided five pounds worth of food to last them a week. I think its one of the Tories cronies that got the contract also. Classy! 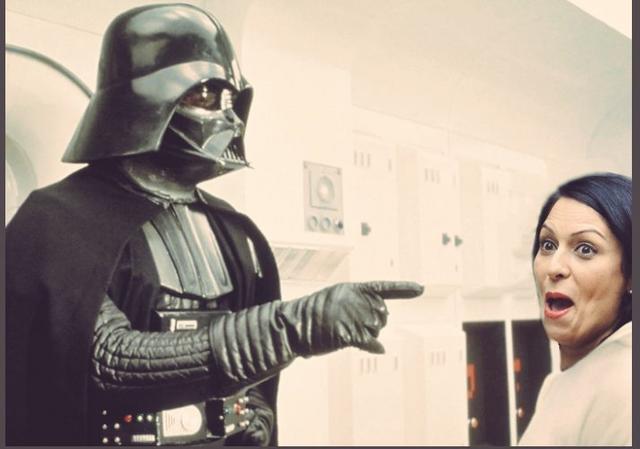 Re: How is the Tory government doing?